“Calico is an all-star ensemble of LA's three very best female Americana artists.
There couldn't be a more perfect combination of genuine talent and creative spirit.
An amazing formation of a band and a completely exciting surprise.
It's been a while since we had something this promising to look forward to..”
- Acoustic Playhouse
•
Los Angeles Music Awards - "National Touring Artist of the Year" 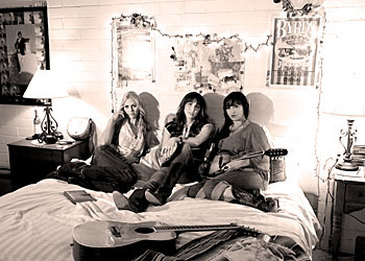 Between the Walnut Groves of the San Fernando Valley and Old Rancho Hollywood, three wayfaring strangers made their first acquaintance. Juniper was an auburn tressed farm hand from Tujunga. While at the Van Nuys feed store, she peered out the window to see a young blonde troubadour, Perry Rose, strumming a six string in the sun. As Juni began to introduce herself, two bandits came flying out from behind the store and snatched the ole guitar from Perry’s hands.

The bandits flashed rusty knives at Perry, and stared at Juni who had come to Perry’s aid. As the bandits gave a sly grin and started their escape, a mysterious brunette came flying at them, snapping away the guitar, and then knocked the bandits down to size. After dusting off their dresses, the brunette had opportunity to introduce herself by her acquired name, Snap Dragon. The three girls had much in common. All were orphaned gypsies, born of traveling musicians from the rugged canyon country. The band of girls made a new home in the hills of Vasquez with an adopted calico cat. A family was formed…CALICO the band.

The group brought their harmonies, tales of trial and triumph, guitar-slinging skills, and dashing good looks to all the local hootenannies. The girls were on a mission, a mission to bring smiles to faces young and old. Before long, they were the talk of the town…and, as they say, the rest is history…